This is one of the oldest debates in the RPG community. It is generally referred to as the “tier problem” or “martial characters suck” or something like that. The problem generally stated is that in terms of game balance for games like Pathfinder, spellcasters are simply vastly more powerful, versatile and interesting to play than purely martial characters.

I tend to agree with the general idea that casters are much more powerful than martial characters. I don’t necessarily think this is a problem. I tend to be of the opinion that mastering the awesome cosmic powers of the universe should make someone more dangerous than swinging even the most amazing pointy sticks.

On the other hand, I think that the game as it is today, with the spells and abilities of some classes, the disparity is truly vast. Spells like “wish” or “time stop” or “miracle” are simply power on a completely different scale than anything a purely martial character could produce.

There are variants of the game which attempt to address this disparity, including “low magic” variants and third party or gamer community options like the “E6” rules.

When I look at literary characters that are commonly considered to be awesomely powerful, it strikes me as interesting how limited those famous literary characters actually were. Merlin was basically a fortune teller with some shape-shifting powers. Gandalf never did anything more impressive than a few fire-based spells and some minor healing.

In some respects I believe the game would still favor spellcasters significantly over martial characters if nothing changed except the existing spell list were capped at, say, level 4. Maybe even level 3.

I’d be interested to get the opinions of folks who visit this blog on this question.

Anyone want to run this for me and a group of players if I can pull them together?

I finished this a week ago but waited to post it until after using it in game so my players hadn’t seen it.

I am considering adding a house rule to my Pathfinder campaigns to allow a character with ranks in the “healing” skill to be able to apply healing to wounded characters up to their total heal skill per day, with no more than their level going to any single character per day.

Huh, turns out that there is a “treat deadly wounds” ability that can heal a wounded character using the heal skill. It cures hit points up to the character’s level but requires two heal kit uses. Which seems reasonable. You have to make a heal check with a DC of 20. If you beat it by 5 or more you can add your wisdom bonus to the healing.

Pathfinder developers have solicited gamer input on how to make some minor adjustments to the magic item system for an upcoming errata release. I have gotten engaged in the discussion, but I have mostly decided not to participate in the recommendations since I believe the existing magic item system is broken from concept through all errata, and that means broken since, oh, say, 1977.

Several people express considerable shock and consternation by my assertion that magic items are just a huge mess from start to finish, so I figured I would document why I think magic items are such a mess, and propose what I think should be done about it.

I could go on, but those are some of the major items.

My personal belief is that almost all of the major game issues caused by magic items are due to the fundamental design of magic items as an ever-escalating bonus to key abilities starting at +1 and going up from there as you level up. This ends up meaning that without magic items a character simply can’t compete, which I believe takes the spotlight off of the character and onto the magic items themselves (this is what Gygax was complaining about in his “Christmas Tree” complaint).

I believe magic items should primarily provide out of combat abilities and those that do contribute to combat should provide flavor and specific tactical options (like specific energy boosts) that require some planning to use to the party’s advantage. In my mind something like a +2 dragon bane sword ought to be a friggin’ artifact, not a hunk of magical trinketry that can be found at any magic shoppe and donut store.

Almost all magic items should provide only temporary boosts. So a “helm of wisdom” would provide a +2 to wisdom for a certain number of rounds per day, no more. A ring of protection should protect against a certain amount of damage only.

The bottom line is that magic items should be de-emphasized so that the characters themselves can shine. A great warrior should be able to be effective with any sword, not just their uber-special 25,000 gold sword that if they lose means they are at an effective -5 to their attacks. A warrior should be a warrior, not a ramshackle collection of magical trinkets wandering around.

My current Pathfinder campaign (the “Elania Campaign”) looks to be heading into the Underdark.

For those who may not know, the “underdark” is a specific part of the Pathfinder “world” that includes a variety of races and monsters that live underground with their own ecology, economy and politics. Perhaps the most well-known of underdark denizens are the “Drow” or the “fallen elves.” Drow elves are presented as the descendent of elves whose pursuit of power led them to practicing the “darker arts” of magic, which ultimately led them to avoid the light of day and move underground.

But there’s a lot more to the Underdark.

In my own world the Underdark is probably more similar to the “official” world of the game system than any other part. The Drow do live there, and there is an entire underground system of caves, tunnels, caverns and domiciles where entire nations live their lives with the world above taking little notice unless something from below decides to make some noise on the surface.

Having said that, the main concern I have about the Underdark portion of my campaign is that I have virtually no terrain built for that purpose. Most of my terrain is either outdoor terrain or else are buildings of some sort.

The one thing I do have is dungeon terrain, which will at least give me an entry into the Underdark. Eventually though the worked stone of dungeon walls will have to give way to raw earth, caverns, or things carved directly into the rock itself.

So… seems like I’ve got some work ahead of me…

A year ago today I was working on the original Wizard Tower. This one: 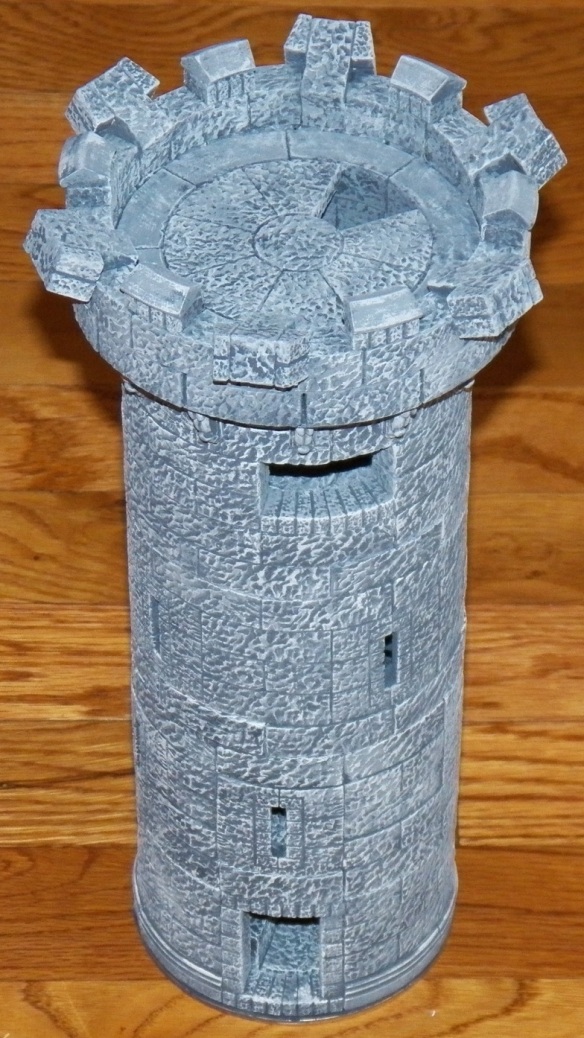 In looking around my room now I don’t know whether to be impressed with all the terrain and other stuff I’ve done in the past year, or depressed by how little I’ve accomplished.