One of the things about being a “gamer” that seems to bemuse some of my non-gamer friends and family is the whole concept of “player character downtime activities”, which is how we describe what our characters do when we aren’t playing them in an actual game.

The very concept of player characters having “lives” outside of crawling around in dungeons or otherwise engaging in epic combat or social encounters seems to confuse non-gamers. And, to be honest, it seems also to confuse some gamers too.

There is a tie-in here to the larger concept of “backstory” and “character development”, which are also somewhat befuddling to non-gamers (and, again, some gamers).

After all, these are things that are generally non-game impacting. From a pure sit-down-and-roll-dice perspective, whether a player’s rogue spent time “outside of the game” scouting out the local gambling casino or a player’s wizard spent time crafting a magic item really just boil down to some circumstance bonuses in certain skill or ability checks or adding an item and subtracting some gold from a character sheet.

But some gamers (and I admit to being one of them) actually enjoy exploring the personalities, histories, ambitions and personal growth of our characters.

For example, I have a wizard that has been in my “available character portfolio” for decades. He’s the first character I ever created and has not only an extensive backstory and personal development history, but I have laid out in detail, room, by room, his “wizard tower” and the island upon which he constructed it. That includes what is located in each room, where the local fauna lives and how he moves about the island and comes to and from it when he leaves to go “adventuring”.

So, I am now working out the details of the long-term home and possible retirement of my ninth level half elf/half dryad druid. That means I am designing her home, laying out the local forest and the major elements of that forest, including the local dryad grove, the lairs of any significant major carnivores and the paths to and from her little forest world.

There is probably some value to exploring the deep psychological needs this sort of thing reveals about me, and one of these days I may visit a mental health professional to discuss this bizarre behavior. But in the meantime, it’s actually a lot of fun doing this.

The only question I have right now is if I want to create an actual 3D world for these characters. My wizard’s island and tower is just drawings on paper right now. But with my recent foray into the realm of 3D terrain and building construction, there’s no reason not to actually build a scale replica of my character’s homes and local environs.

So, how weird is all that? (As if I really want to know…)

Sigh.. our excellent 4e campaign has come to an epic close. The final conclusion was very well done and for a while it seemed that evil would prevail. But the party managed to barely survive and defeat the god-slaying BBEG (or in this case ‘Big Bad Evil Chick’ or ‘BBEC’). As a sort of unusual “reward” the remnant powers of the gods that had been slain became available for acquisition and my legendary damage-dealing ranger, ‘Kataar’, has now ascended partially into the pantheon of deities as the new Demigod of Hunters and Assassins.

I’d like to thank Rae Vhen the GM for his incredible work as the GM. I learned a lot from him and I am sure my own campaigns will be better for having played in his. I’d also like to thank my playing partners for three years of fun and camaraderie. By the end of the campaign I believe Kataar was the oldest “surviving” character in the party.

Kataar was my first and only serious 4e character I’ve played. I did enjoy playing him, not just because of his crazy damage potential, but also because of his street-savvy and his clever utilization of magical toys and trinkets. He always was able to pull something out of his bag of tricks, and even in the final cataclysmic battle his “wonderful toys” gave us a critical respite from a crushing aura which was seriously hampering our combat effectiveness.

I do think Kataar was a surprisingly multi-dimensional one-dimensional character. Although he had the charisma of a garden slug, he excelled in sneaking around, climbing on or over things, finding stuff, opening things (although at the end of his career we had a more talented thief in the party…) and breaking stuff. He was particularly good at breaking stuff.

Although I have mixed emotions about ending such an epic campaign, I am actually happy to retire Kataar and move on. In the end Kataar may well be the single character I have invested the most time and effort into in my entire career of gaming. I can’t honestly say he is my favorite character (I tend to prefer complex, troubled spell casters over straightforward martial characters) I can say he’s been a blast to play.

Heh, as I was setting tags for this post I realized I now have to move Kataar from “active” to “inactive” in my categories… sigh.

Well, we did it. My 4e group finally hit epic level. Level 21 introduces us to the whole new realm of epic adventuring.

Our first quest appears to be to hunt down and subdue the Tarrasque.

My ranger, Kataar, is as close to a munchkin character as I’ve ever played. He is a melee monster. A damage dealing dervish of demonic destructiveness. It’s sorta embarrassing how much damage he can do.

Which brings me to epic-ness…

I was expecting to see some bump in effectiveness for reaching epic level. I figured it would be more than a simple level up situation.

But I was amazed after going through the online Character Builder tool and comparing my post-epic Kataar to my pre-epic Kataar.

Basically he has gotten significantly better in every area he was already pretty darn good. The epic path he picked allows him to add a +2 to any two ability scores. Of course he picked dex and str. Plus crossing the epic boundary provides a boost to several feats just for moving from the “paragon” tier to the “epic” tier. For example, his “power attack” damage bonus goes from +6/+4 (main hand/off hand) to +9/+6. His weapon focus feat goes from +2 to +3. Etc.

The question is going to be whether epic level encounters factor this sort of jump in, or if the AC, Attack and Damage progression is pretty linear for them. I guess I will find out.

I’ve only played a couple of characters in my 30+ year D&D career that got higher than level 12. Usually the campaigns I am in start at level 1 and peter out somewhere around level 10 or so. Playing a demigod-type character is an unusual situation for me, and it has its own entertainment value.

I am looking forward to our next session so I can see what sort of impact all these combat boosts have in, well, combat. 🙂

Here’s the witch I will be playing this weekend in a low level Pathfinder campaign. 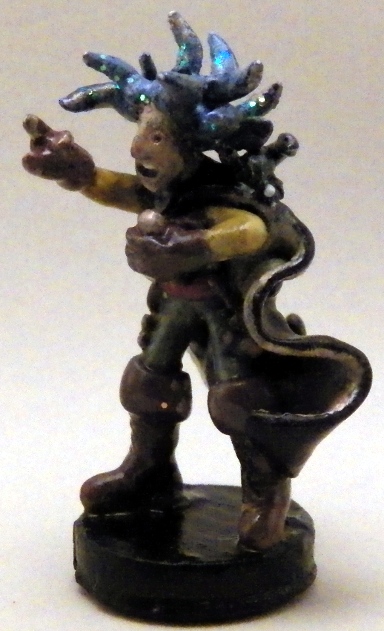 One of my all-time favorite RPG characters is my currently 7th level female druid named “Yleris.” Yleris is a custom race that I worked with the original D&D 3.5 GM on. She is the magical child of a male elf and a female dryad, brought into this world as a special prayer by the dryad to mother nature herself. As a half-dryad Yleris is not tied to an oak tree, although she suffers certain penalties for having been removed from her grove. As part of the original campaign plot her grove (including her mother dryad and mother oak tree) had been destroyed by raiding goblins and humans.

Well, time goes on and we mostly play Pathfinder now instead of D&D 3.5, so I am in the process of converting her into a Pathfinder druid.

The problem is that Pathfinder druids are not nearly as flexible as 3.5 druids were. Yleris, due to her dryad heritage, is a rather unusual druid anyway. Instead of focusing on summoning creatures to fight for her, or wildshaping into insanely powerful animal forms and charging into melee, she has always followed her dryad upbringing and has been essentially a bow-based ranged combat fighter, when not casting spells. This works out pretty well in 3.5 because there are a lot of ranged ray attack spells that druids can use, so her ranged bow attributes, items and feats can be used with her ray attacks, making her a very effective ray-based artillery combat character. Probably too effective actually.

In core Pathfinder druids get virtually NO ranged ray attack spells, so her combat effectiveness will drop dramatically after the conversion.

However, I am attempting to work with the two GMs in whose campaigns she operates to see if I can come up with a specialized dryad-based druid archetype that will restore some of her ranged combat effectiveness.

My initial idea is to have her be able to cast certain wizard/sorcerer ray attack spells, but give up certain druid spells in return. Or perhaps give up her wild shape ability in exchange for the ray spells. In the end she would retain her uniqueness and would continue to be true to her concept, but eventually these sorts of changes might make her so different that she may not be recognizable as a druid at all…