So my wife works at Michaels. She told me they were having a half-off sale on some clearance priced items I might be interested in. So I went and checked it out. I got all the stuff in the photo below for less than $20. The cannons and treasure chests were a quarter each. So were the knights AND horses. 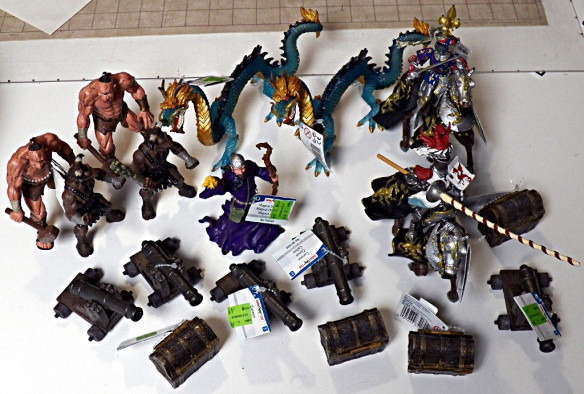 Some of this is too big to use as is for gaming, but there are things you can do. I’m probably going to make a giant stone statue out of the wizard figure.

I could have bought a lot more, but I got a good selection of what they had.

Here it is, at last. The long-awaited tutorial on making gelatinous cubes.

Here are the steps:

First, you need to make an “original” that you will use to create a mold. Once you have a mold, you can cast as many copies of the original as you like, using clear resin to create the iconic gelatinous cube look. I started with a small cube made of aluminum foil and some Sculpey clay: 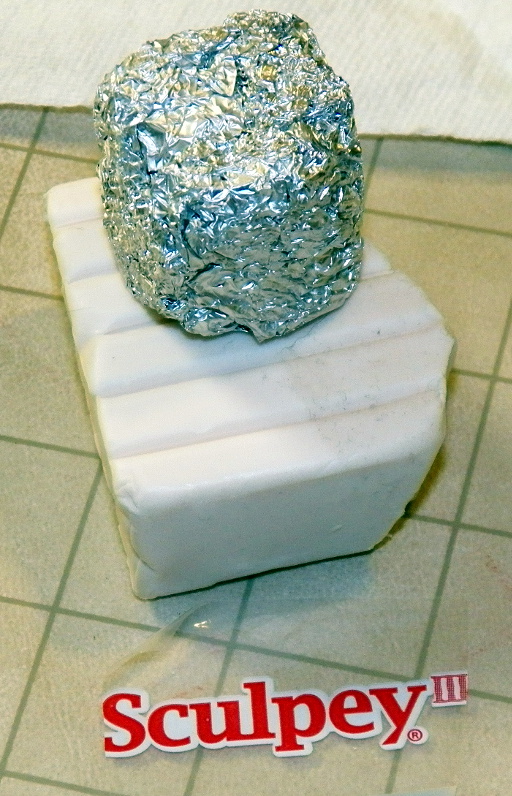 Then you work the Sculpey until it is malleable enough to cover the aluminum cube. This is when you “sculpt” it. I tried to make mine look sort of undulating and as if it was caught in the middle of some pulsating as it moved. I don’t think there’s really any “right” or “wrong” way to sculpt one so long as it it generally cubical. I did make mine a bit too large, which isn’t a problem for 2.5D tiles, but creates a tight fit in 3D block dungeons. If I make a new one I’ll make it deliberately smaller so it fits better. This photo is actually one I did just for this tutorial, I lost my original block in our move. I had some black paint on my fingers when I did the sculpting so it got all over the Sculpey clay. Which is fine since the color of this is pointless.

Next you’ll need to make a silicon mold. I did this years ago and didn’t film it then, so I’m linking to another youtube video for the instructions on how to make a simple mold. This is much easier than “two-part” molds and really just involves making a box to hold the mold material, mixing it up and then pouring it over your original. 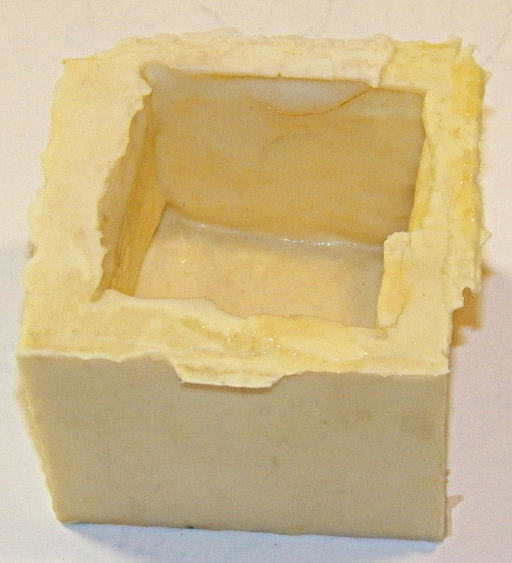 Now the fun starts. You’ll need some clear resin. For this miniature I’m using this stuff. Mix up enough to fill in the “bottom” of the mold, which should be the “top” of the final miniature. You generally don’t want the embedded items in the gelatinous cube to be at the very edge of the cube, you want there to be some depth to them. I usually do about 1/5 to 1/4 of the cube.

You are going to need some “volunteers” to put inside the cube. In this photo the bottom layer of resin has already been poured. It is still curing though, this resin takes about 36 hours to fully cure. I was impatient and paid a price for not waiting that long. Anyway, once I had the bottom filled, I took these minis and decided they would be the “victims” that the cube had eaten. One is a mage knight mini that I don’t care for much, and the other is a zombie from the infamous “bag of zombies.” 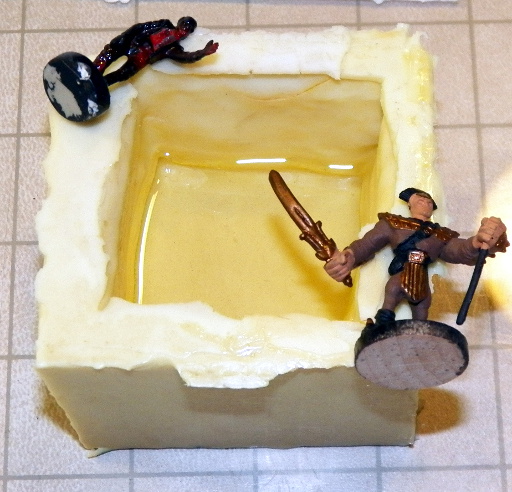 Here is where I made a multitude of mistakes. As mentioned above, I waited until the resin was firm, but not until it was fully cured. Then, to hide where I had cut the base from the miniature, I painted the “shoes” black. Unfortunately, again due to my impatience, I didn’t let that fully dry before putting the miniature in the resin. More on that later. Anyway, in this image I have put the miniatures into the mold, resting on the not-fully-cured bottom layer of resin, and poured another 1/3 or so amount of resin to fill it about halfway up. You have to do this in sections if you don’t want all the items you put into the cube to just line up at one level. Which makes making one of these things a multi-day project. My problem was that because I didn’t allow the bottom layer to fully cure before putting the first mini in the mold, that mini, over the course of hours, slowly sank to the bottom so that its feet now rest almost on the top of the cube. I did allow the next layer to cure more before putting the second mini in.

Once that layer has cured, you can put the final bits in and fill it to the top. 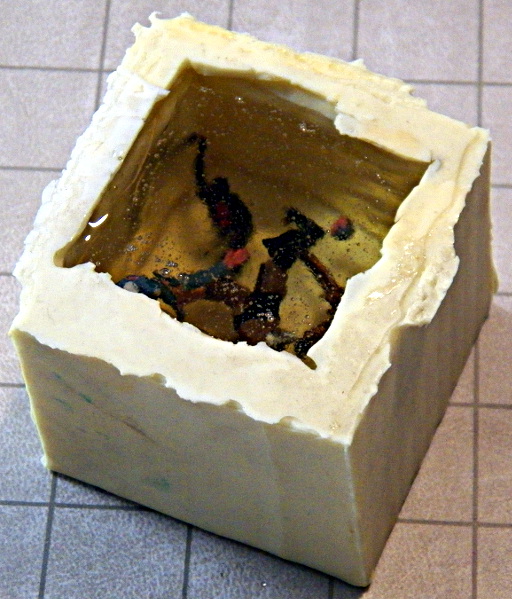 And then, after at least 48 hours, you can pull this out of the mold:

The worst thing about this cube is that the paint I put on the “shoes” after cutting off the bases wasn’t quite dry and sort of dissolved into the resin. I’m not sure how much that affects the final result, but it annoys me.

Here is a photo of almost all of the game miniatures I’ve ever made myself from scratch:
(Caveat, three of these miniatures have wings I cut off from a Halloween bat, but all the rest is my own work) 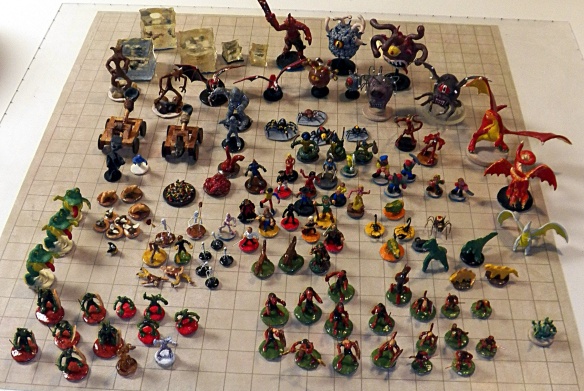 Here are three of the first minis I ever made. I was just starting a campaign and needed some goblins and kobolds. I made them way too big, and I didn’t even pretend to go for artistic merit. I just made some stuff I thought would be more recognizable than pennies or pawns of some sort:

At around that same time, I made this dragon, which has never been used in a game:

I did manage to get better, but even today I am using these minis for PCs in actual games: 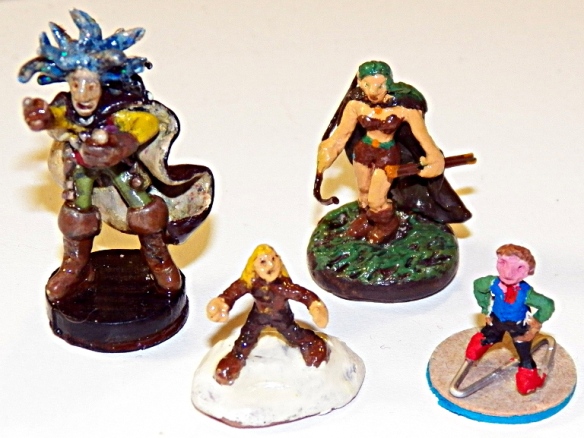 And here is a rare example of me TRYING to be decent. A Babau demon:

So, you see, I suck. But I have a lot of fun, and a lot of minis. Almost all of these are made of Sculpey clay, but some are made from various epoxy putties.

I actually got off my butt the last few days and did some painting. 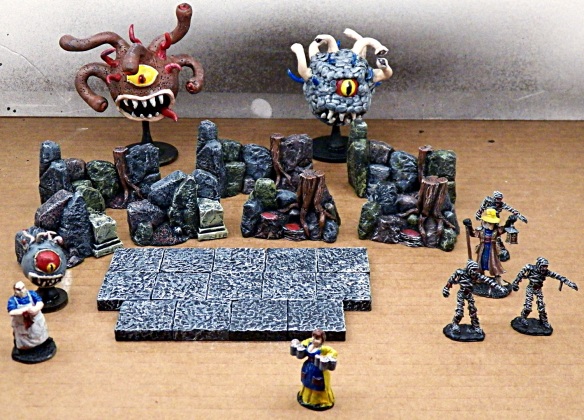 Had another plastic ball, some sculpey clay, and time on my hands, so:

Neither are painted. I just used some markers to put some color on the big one. It will get base painted black and totally repainted.